Bond-ing with Your Guests | Secret Agent

Bond-ing with your guests a spy-themed dinner party that’s suave enough for a secret agent. 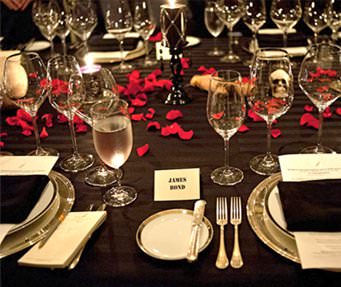 Everyone’s favorite (not to mention the sexiest) secret agent returns to the big screen on November 9, 2012, when Skyfall, the twenty-third film in the James Bond series, hits theaters. Capture the film’s glamour, mystery and romance with a dinner party celebrating that debonair man’s man who always manages to save the world and get the girl. We show you how to add touches of authenticity and glitz to your Bond-themed soirée—without performing a bank heist to pull it off.

Chic yet wallet-friendly methods abound when it comes to setting an espionage scene. Send spy-inspired invites labeled “Top Secret” to your guests. On the night of the bash, station a (willing) friend posing as a Russian bodyguard to do a weapons check as guests arrive; create mock C.I.A. nametags for place cards; and set up a roulette or blackjack table.

For décor and favors, find inspiration in the Bond films. “We’ve done live fish in bowls as centerpieces, and a voodoo theme, with skulls, candles and voodoo dolls,” says Alicia Rodrigues, marketing manager for The Jefferson Hotel in Washington, D.C. The hotel’s restaurant Plume regularly holds wildly popular Bond-themed dinners. She recommends you ask your attendees to dress up as their favorite film character and bring memorabilia items of their own to display.

Bond-ing with Your Guests & Cocktails
A well-chilled martini is synonymous with the suave undercover agent. Have pitchers of several variants ready as guests arrive.