The only Italian region without access to either the sea or international borders, Umbria is a solitary and soulful world apart. Often overshadowed by neighboring Tuscany and Lazio, this lush and sparsely populated land is affectionately referred to as the “green heart of Italy.”

The gentle temperament of its ancient indigenous tribe, the Umbri, evidently played forward over the centuries to produce A-list religious celebrities, including Saints Benedict, Clare, Rita, Valentine, and most famous of all, St. Francis of Assisi.

A virtuous and dutiful approach is also part of Umbria wine identity. While Tuscany nabs the glitzy accolades and other neighboring regions excel in volume production, Umbria offers an array of grape varieties, wine styles and price points. It’s a compact, cautious and focused region that has something special for every palate.

“They say ‘good wine comes in small barrel,’”says Riccardo Cotarella, a founder of the Falesco winery and Wine Enthusiast’s Winemaker of the Year in 2001. “Umbria, and the wine revolution it has experienced over the past 30 years, makes for big potential in a small package,” he says.

Born near Orvieto, Cotarella is among Italy’s most celebrated enologists and has worked to improve the reputation of Umbria since the 1990s. 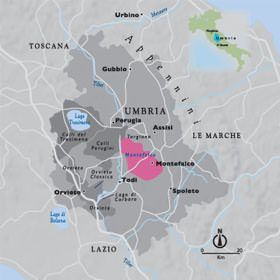 The hamlet of Montefalco, with its medieval rampart walls and Romanesque churches, is located 1,550 feet above sea level, approximately 30 miles southeast of Perugia. The surrounding Colli Martani hills are covered with cordon-trained vines that enjoy soft breezes and long summers.

Extensive new plantings that saw the region under vine increase from 250 acres in 1990 to 1,750 acres in 2010 has forced producers to market aggressively, and some excellent values are now available to consumers.